5G standardization process by the 3GPP follows the vision set out by ITU’s IMT-2020 requirements. 5G is designed to support enhanced mobile broadband (eMBB) services delivered at orders of magnitude higher capacity/subscriber density and at signiﬁcantly lower latency than possible by previous generations. More importantly, 5G is speciﬁed to optimally support emerging use cases, such as massive machine-type communications (mMTC)/Industrial Internet of Things (IIoT) and ultra-reliable and low latency communications (URLLC). These new use cases are expected to transform many existing social and economic processes and enable the development of novel products and services.

To support enhanced performance, enable new types of services over the mobile network and better exploit new technologies, such as resource virtualization and cloudiﬁcation, 5G network architecture has been speciﬁed in a more modular schema than the previous generation mobile systems. The RAN functions have been decomposed in a way that they can be performed in one or diﬀerent locations. The 5G Mobile Base station, the gNodeb, is decomposed into three main functional entities Radio Unit (RU), Distributed Unit (DU) and Centralized Unit (CU), which can all be physically co-located in the cell/antenna site (Figure 1) or be ﬂexibly co-located in pairs (Figures 2,3) or located separately in diﬀerent sites (Figure 4) closer to, or at the network edge. Further decomposition of the control (CU-CP) and user plane (CU-UP) functionality of the CU have been speciﬁed, while user applications can be deployed at the CU-UP location. These options allow the functionality of multiple DUs and/or CUs to be pooled in a single location to optimize the use of computational resources and cell coordination, but also allow applications involving data storage, processing and feedback to be moved closer to the cell site, or even at the cell site itself, to minimize service latency.

Therefore the 5G RAN can have a ﬂexible distributed, centralized or a hybrid architecture depending on the characteristics of the services to be delivered. Each option has its advantages, disadvantages and implementation cost, and its adoption depends on the market and infrastructure circumstances of a particular Mobile Network Operator (MNO). The RAN still represents the largest part of the mobile network cost and the cost of adoption of the various RAN architectural approaches depends heavily on the availability/cost of the transport infrastructure, which interconnects the various parts of the RAN and the Mobile Network Core.

RAN Transport for the 5G ERA

The transport segments between the 5G network entities have been named as fronthaul, midhaul and backhaul, collectively referred to as X-Haul (Figures 1-4). Fronthaul and backhaul concepts are well known from previous generation systems, while the midhaul notion as introduced by 5G has similar transport characteristics to backhaul.

Capacity, latency, synchronization, networking protocols are the main deﬁning features of X-Haul. The features of 5G performance that need to be supported by the transport/X-Haul technology are: peak user capacity of 1-20 Gbps or more depending on cell-site size and end-to-end service round trip latency 1-10ms depending on the application. The dominant networking technology is Ethernet/IP/MPLS and standard packet-based synchronization methods, such as Synchronous Ethernet (SyncE) and IEEE1588-2008 Precision Time Protocol, are required as primary synchronization or as backup to the GNSS-based synchronization on the cell cite. Note that transport connections may need to support the capacity of multiple interconnected cell sites, while the overall latency introduced by the transport equipment needs to be a fraction of that required for the 5G service. Furthermore, fronthaul requirements can be disproportionally taxing is terms of capacity and latency compared to the actual service characteristics. 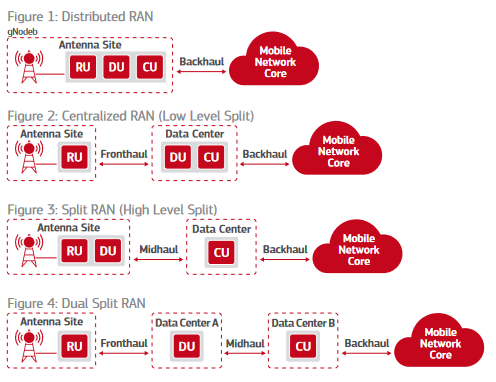 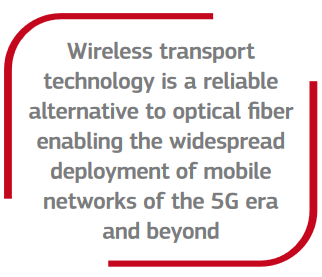 Many MNOs around the world have already embarked on a 5G technology deployment program mostly covering urban areas. Nevertheless, previous generation technologies are still prevalent in the networks of most established MNOs and are expected to continue to be at least in the medium term. Pre-5G operators that introduce 5G technology to their networks need to ensure that their transport equipment supports the increased capacities and the protocols relevant to 5G, as well as those of the pre-5G technologies. Therefore, a wide range of capacity and latency features, as well as, transport protocols can be required to be supported by the transport systems depending on the type of X-Haul, the requirements of services delivered, the size of the cell sites and their relative positioning in the chain of links between the access side and the aggregation side of the network.

While optical ﬁber transport is considered the most desirable choice for X-Haul due to its “limitless” capacity and predictable performance, it is clear that the availability of a ﬁber interconnection is not expedient or economically favorable in many cases, especially in the numerus ﬁnal leg(s) towards the cellsites.

Wireless transport technology is a reliable alternative to optical ﬁber, which has been playing a major role in Mobile RAN transport for decades and is still considered of vital importance in enabling the widespread deployment of mobile networks of the 5G era and beyond. According to a report authored by ABI Research and published by GSMA in February 2021, wireless is expected to be the dominant backhaul technology until at least 2027 making up around 60% of the total worldwide backhaul links at that time. In the last decade E-Band radio technology has become a wireless technology of choice that MNOs use to support their short and medium range multi-gigabit transport requirements, especially in urban areas. It is now globally recognized, as conﬁrmed by the ITU-R WRC-19 outcomes, as a critical X-Haul transport technology required for the large scale deployment of 5G networks. 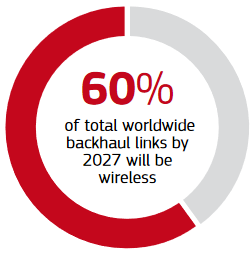 Intracom Telecom's UltraLink™ radios, already widely deployed in MNO and WISP networks, are ideal for X-Haul applications as they are at the forefront of performance in terms of link range, spectral eﬃciency and operational ﬂexibility. The high end radios of the UltraLink™ E-Band product line, meaning the UltraLink™-GX80, a 10 Gbit/s radio capable of 20 Gbit/s in XPIC conﬁguration, and the new UltraLink™-XR80, a record breaking 30 Gbit/s radio, have been designed to fully satisfy the X-Haul requirements of 5G, as well as those of previous generation systems. Link transport latency is a few tens of microseconds, a fraction of the desired 5G service latencies, thus allowing the majority of the service latency budget to be allocated to the mobile network equipment itself.

UltraLink™ radios operate in Ethernet transport mode but can also support native CPRI transport via a simple conﬁguration change. They oﬀer a range of GbE interfaces in the 1/10 25 GbE range, as well as, CPRI v7.0 fronthaul interfaces up to Option 7. Therefore, they oﬀer versatility in supporting the transport various traﬃc types, such as Ethernet/IP/MPLS, CPRI, eCPRI for X-Haul of Any-G systems, and give operators the option to quickly and costeﬀectively deploy any RAN architecture according to their needs.

The UltraLink™ platform supports advanced L2 and L3 networking capabilities, as well as SDN-based management principles to allow network and service conﬁguration programmability and automation. Finally, featuring a complete set of packet synchronization options, UltraLink™ radios enable the accurate delivery of frequency and phase synchronization over the transport network. Intracom Telecom is committed to stay at the forefront of radio transport as the technology in mmWave bands (E, W, D and beyond) progresses towards 100 Gbit/s.